In early 2008 a handful of like-minded individuals saw an opportunity to bring together local runners with the purpose of sharing skills and resources to benefit people interested in running in the local community. An inaugural meeting was held on the 4th February with a view to setting up a formal running club. At that meeting club officers we elected consisting of: Chairman - Andy Howe, Club Secretary - Wilf Fox, Treasurer - Fiona Cremin, Social secretary - Darren Long, Promotions & Press Officer, Joe Montague. A ballot was held during the following few weeks and the club name was chosen to be ‘Brackley and District Running Club’, with a strap line ‘The sole destroyers’. Club colours of predominantly orange shirts with black logos etc. plus black shorts, were also agreed. Club fees were set at £25 in the first year to cover UKA affiliation and a substantial welcome pack for members (this dropped to £20 in subsequent years), with membership commencing on 1st April 2008.

During that first year (2008/09) the club grew quickly, with club sessions being held on Tuesdays, Thursdays and some Sundays. Regular social events were held including a summer barbecue, and a Christmas party held at The Crown, which consisted of a meal and disco which was attended by 26 members and guests. The first race with an official Club presence was the Weston 5 in 2008, and the first run in Club colours, the Thame 10k. A number of developments to the Club were being planned including to set up the Club championships, with the first race in the year being the Not the Roman IX. It was also muted that a Brackley 10k be organised in 2010, to coincide with Brackley Carnival. By the time the first AGM was held in April 2009, the Club had 53 members and the Club had its first baby – Freya- courtesy of Sharon and Toby Cartwright. The first presentation evening was held in conjunction with the 2009 Christmas Party which was held at The Fox in Farthinghoe. By early 2010 the planning for the suggested Brackley 10k had accelerated and the first ‘F1 Chicken Run’ was held on the 12th June, attracting 162 starters with Tony Lock of Witney Road Runners being the first man home in 35.58 and Michelle Bartlett (Banbury Harriers) the first woman with a time of 41.38.

In 2010 the Chicken Run was moved to a separate day from Brackley carnival, and in June 2011 the Club changed its base to the football club. A new Chair, Eoin Tweeddale, took over in 2012 with founding Chairman Andy Howe being awarded a lifetime membership of the Club at the 2012 AGM. That year, 10 BDRC members took part in the London Marathon. The Club was five years old in 2013; 245 runners took part in the Chicken Run and the venue for meeting returned to BLC. At the AGM Ali Nuttall took over as Club Chair and it was reported that there were 55 members. The following year the Club began to venture into cross country and membership had increased to 65 runners. A system of men’s and women’s team captains was introduced and the Club took part in the Hilly 100.

Two thousand and fifteen saw the first rise in membership fees since the Club started from £20 to £24 for existing members. A hundred and seventy eight runners completed the Chicken Run that year, with a charitable donation being made to Katherine House Hospice out of the surplus raised for the Club. The idea of the gentle pace group was floated and this started in November, and for the first time the presentation event moved from the Christmas party to the evening of the AGM. At the AGM it was reported that the Club had 41 members and saw Gareth Bowden take over as Club Chair. Darren Long was made a lifetime member in recognition of his work since co-founding the Club.

The Club championships saw significant expansion in 2016 with the introduction of a handicap competition giving members of all abilities the opportunity to compete. In addition, the four-mile time trial – another handicapped competition - consisting of heats and a final was run for the first time. There was good participation in these events, along with the cross-country competition, and Club funded one-off events such as the Hilly 100 and the Milton Keynes Festival of Running. At the AGM it was reported that membership had risen to 56 members. In 2017 the newly designed Club kit was introduced which proved very popular within the Club and received many positive comments from members of other clubs. Two hundred and thirty two runners completed the Chicken Run and a charitable donation was made to the Gosset Ward, (Special Care Baby Unit), Northampton General Hospital. With the expansion of the Club’s membership (reported as being 64 members at the time of the AGM) attendance at social events was high, with over half the membership attending the Christmas party held at Hummingbirds Bistro. 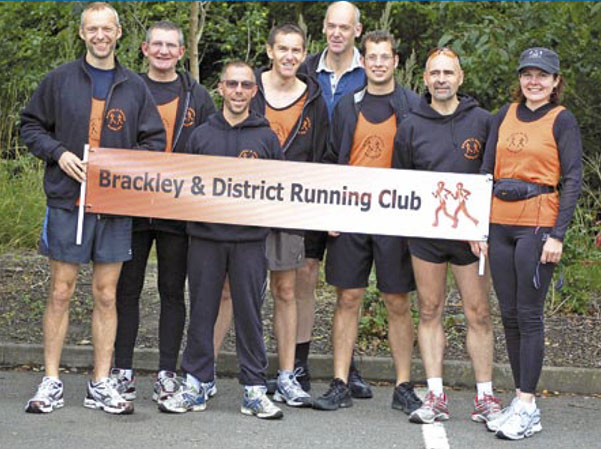