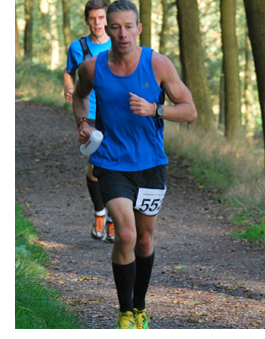 The weather was perfect in Derbyshire back in late September on the Sunday morning of the Ladybower 50 mile race, cool, sunny and still. Just under a hundred competitors lined up for the 50 miler and at 8am we got under way. My intention was to run at an average of 7 minute 35 seconds per mile for as long as possible, I thought I could do it for 40 miles reasonably comfortably but the last ten would be new territory.

A group of five of us led the field which soon split into a lead group of three and a little way behind were myself and another guy, we were both going quicker we intended. By mile six the other guy decided to slow down in order to get back to his race plan, very sensible, he ended up finishing third. I was finding it hard to get the pace down so kept going at 7 minute 10 second per mile average pace, even though I knew I would pay for it later.

I overtook the third place guy at the 7 and a half mile mark and stayed roughly a minute behind the front two for a few miles. The second place guy suddenly tired quite quickly and I passed him at 13 miles. With 35 miles to go the leader was about 90 seconds in front, 5 miles later that lead was down to 30 seconds. About two miles later I passed him and put the hammer down for two miles to get out of sight, I didn't see him again.

I went through halfway in 3:04 and felt pretty good, the food and gel was going down ok and my shoes were fine , no blisters or rubbing anywhere. I was having fun so kept running a little bit quicker than I should have done really. 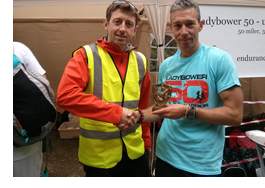 At mile 40 the faster than intended pace took it's toll and I suddenly felt faint and devoid of energy, I was a bit blurry eyed and worried about getting through the next ten miles. I refilled my water bottle and poured a lot over my head, this refreshed me a bit and after a bit of food I struggled through the next 4 or 5 uphill miles knowing the last 5 would be easier, on road mainly and slightly downhill. Once on this final stretch I was able to pick the pace back up again, other than a bit of tightness in the calves everything felt good again and I was able to enjoy the last couple of miles even pushing it on the uphill sections.

The eventual distance was 51.3 miles and I completed the race in 6 hours and 23 minutes, winning by over 50 minutes and breaking the course record by over an hour. It's a beautiful course, not difficult or too hilly a perfect first ultra for any of you out there who fancy it, I will be there again next year, hopefully some of you will be too. 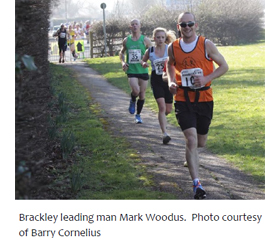 On the warmest day of the year the first club championship run was the Banbury 15. We all met at Spiceball Leisure Center in good spirit's made our way to the start in the park. The course was a testing one due to the hills but made up by beautiful scenery north of Banbury running through Bourton and Cropredy. The great thing about a race when you're in a club is the support you get whether you finish first or last. 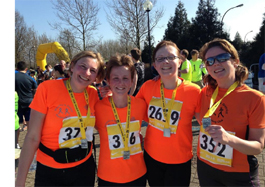 Milton Keynes Half Marathon and 10K

Report by by Dawn Breward

Who could have predicted that after 3 months of winter training the Milton Keynes Half would present us with the hottest day of the year so far! We were all grateful to see a good number of water stations on this picturesque route. A reasonably flat course with a few cheeky inclines coming out from the underpasses, there was plenty of support, encouragement and smiling faces along the way. Four of us ran as a group for the first 7 miles and egged and pushed each other along the in the heat. However, after mile 7 there was a break in the group with ET in front, followed closely by Watts and Crookes (who was still suffering a miserable injury) in hot pursuit. Leaving Geordie, Little Legs and Keeley in that order not too far behind. No-one could have predicted the intensity of the hill going into mile 13, which we were supposed to run up. We all gave it our best shot, some ran, some walked and others just fell up it!! 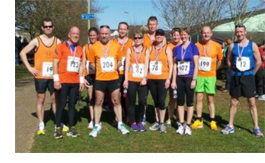 The second club championships race of the season was the Carterton 10k which took place on March 16th. Another warm and sunny day there was a great turnout of 12 club members competing in this new addition to the championship calendar. Billed as a flat and fast course, it wasn't without its challenging moment but fantastic results were achieved all round. 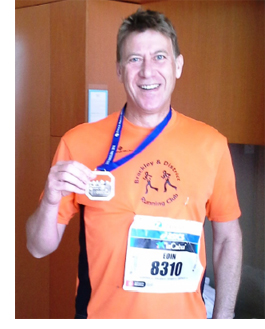 Whilst others were running in the sun at Carterton, ET jetted off to Barcelona to run a marathon—here's his report

Having been rejected in the ballot for the 2014 London Marathon I looked for an alternative Spring Marathon and Barcelona ticked all the boxes for me including visiting a city I'd never been to be-fore. As with London it was necessary to pick up my running number and chip beforehand so I did this on the day before the race and went to the pasta party that they had organised.

It was very crowded at the start line – all 15,000+ runners start from the same place but was well organised so that they started runners in "waves" It was a clear morning with not a cloud in the sky but was cool enough at 8:30AM and running through the city streets we were well shaded from the sun which was had only risen an hour earlier.
Supportive crowd lined the streets. Not so many as you see at London but enough so that you're never far away from a cheer or some applause. I was willing myself not to get carried away with the pace and settled down within the first 5k at just over 27 minutes. The first major landmark came into sight, the Nou Camp, which occupies a large area and it took a while to run all the way round Not knowing Barcelona I can't recall many other landmarks that we ran past – I found these out over the next couple of days from the Hop-On Hop-Off tourist bus but I enjoyed almost every single minute of the race. The sun really came out after 11:30 and I was wilting in the sun

I can't fault the organisation throughout – lots of water stations, free gels, fruit and nuts and run through showers at 30km and at the end. As I tired towards the end there was lots of support from the crowds and other runners – it was a brilliant atmosphere and for anyone wanting to run a marathon abroad I would thoroughly recommend it.

Final time: 4:19:41 – a pb by over 16 minutes thanks in no small part to the structured training sessions we now enjoy at Brackley and District Running Club.